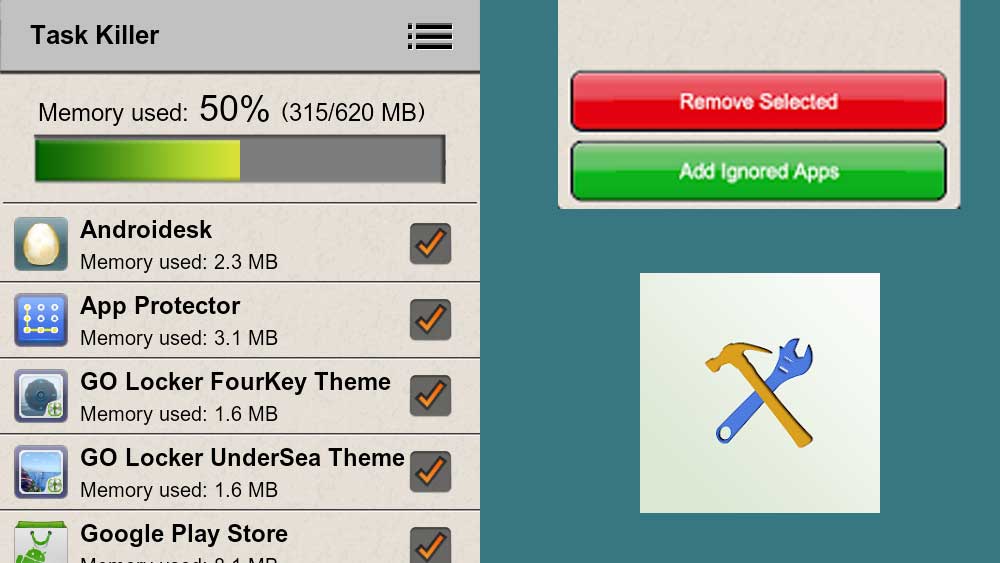 When using a smartphone all of its user’s bank on it for almost everything. Be it official or personal and a smartphone has it all. So, isn’t it a compelling necessity to pay the best attention and action to keep the momentum going smoothly?  Yes!  to understand and feel this one must experience of been without it for a few hours.

Well, it’s time to put a stop to more anxiety. Not to worry smartphone users, got a smart app to take care of the most loved and trusted companion, in the most suitable way. The Task Killer App it is. Here’s a quick run through it’s well thought and designed built in features.

Non used background apps take a heavy toll on Memory and Battery. By efficiently removing them will help maintain optimal Memory levels and Battery power. Task Killer App offers a choice to the users. Users can select the apps they want to close and do it by themselves. This feature makes sure the users have full control over the smartphone contents.

And only the contents they want will remain. Task Killer App will also keep an eye to make sure that apps closed will not re-start and re-enter. With the Ignore List feature, the users can add or remove apps. This helps effective filtering to add and remove.

Sustaining Memory will be a top priority of this App. When the Memory keeps diminishing to low levels, Killer App using its super intelligence sensor power will automatically act to kill unused Memory draining tasks running even without the knowledge of the users.

Apps menu gives more details of the services featured in the app. The details will show active apps and their impact on memory. Will reflect the availability of free memory in the smartphone.

CPU the cockpit that contribute to the smartphone’s overall operations, need to work at its best. Junk in the smartphone will adversely affect efficient functioning of the CPU. However, this app will monitor the CPU’s working as well and take necessary action when needed for its smooth functioning. This handy super Task Killer App is supported by many languages apart from English.  Italian, Spanish, Portuguese to name a few.

With the Task Killer App in your smartphone be assured the most looked forward to functions such as Speed, Memory, Storage, Battery, and all of the others will be taken care of fully. No more frustration and disappointment, making everyone wonder “Why on earth didn’t we have this super Task Killer App in our smartphone all this time” Never too late let’s get it now. Feel the difference on the smartphone’s performance now. Totally Satisfied.

This app is like Clean Master or NOX Cleaner apps. Those apps remove junks, block unwanted apps, remove unwanted apps, improve performance and many more. You can install this free Android optimizer or Task Killer app using below link. Click below link using your Android phone to install.

2 thoughts on “Task Killer – One Click to Speed your Phone”